Some women go to great lengths in search of the perfect derriere, but it doesn’t always end well. Though Brazilian butt augmentation might be the hottest trend to hit the plastic surgery industry in recent years. Online inquiries and butt lift consults skyrocketed thanks to the curvy figure popularized by Beyonce, Kim Kardashian, and Nicki Minaj. But many women who go under the knife don’t realize that the dangers of butt injections might outweigh the risks.

Maribel Cardona didn’t realize she was risking her life–she just wanted a better butt, according to Miami Times News. The 51-year-old mother of 5 hired a dermatologist to perform the procedure. Though the doctor wasn’t a plastic surgeon, the state of Florida allows any doctor to perform cosmetic surgery, and Dr. Anthony Hasan had been performing these procedures for years.

The fats injected into the buttocks tissues allowed fatty matter to enter Maribel’s bloodstream and cause a lung embolism. She died shortly after the procedure ended. The irony? Maribel’s son had warned her of the dangers before she had the procedure done, and she changed her mind–until she realized that her deposit was non-refundable. That decision cost her life.

Sometimes, would-be cosmetic surgeons market their “services” on the black market. They lure prospective clients with promises of the perfect round butt, then make off with the money and leave women with hundreds of thousands of dollars in medical bills due to the botched procedure. These black market butt lifts can result in permanent disfigurement or even death.

According to ABC News, Two Tampa women were sent to the hospital after allowing a woman named Sharhonda Lindsay to inject them with commercial grade silicone and saline solution. Both became ill the day after the procedure. One woman was put on dialysis after complications resulted in kidney failure.

Miss Argentina of 1994, Solange Magnano, died after undergoing butt implant surgery as well. ABC News reports that (much like Maribel Cardona) Solange died from a pulmonary embolism after injections that were intended to give her a perkier rear. Pulmonary embolism is a risk of any surgery–but it’s a significantly higher risk among doctors who claim to be familiar with various procedures, and with procedures like the Brazilian butt lift, which involves injecting fat deep into your tissues.

4. Failed Butt Lift Leads to A Cascade of Other Problems

Renee Talley went in for a Brazilian butt lift, but reacted negatively to the injections. According to Talley, the injected silicone worked its way up her back and down the backs of her thighs and caused her to feel ill and suffer from other health problems.

When she went to another plastic surgeon to have the silicone removed, she was told she could be severely disfigured because the tissue surrounding the butt injections would have to be removed as well. She opted to get butt implants to fix the disfigurement at the same time as having the silicone removed, and the result was disastrous. Her YouTube video went viral as a result.

She was told that she was stuck with the results–her only alternative was to fill in the gaps to smooth things out, which resulted in a disproportionately large backside. Vanity wrote the book Shot Girls after her experience and is now something of an anti-butt-injection activist to inform others of the dangers of butt injections. 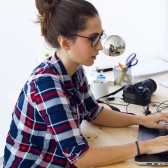 More from this Author

Get a Better Body, now!